Burolandschaft and Collaboration in the Digital Workplace 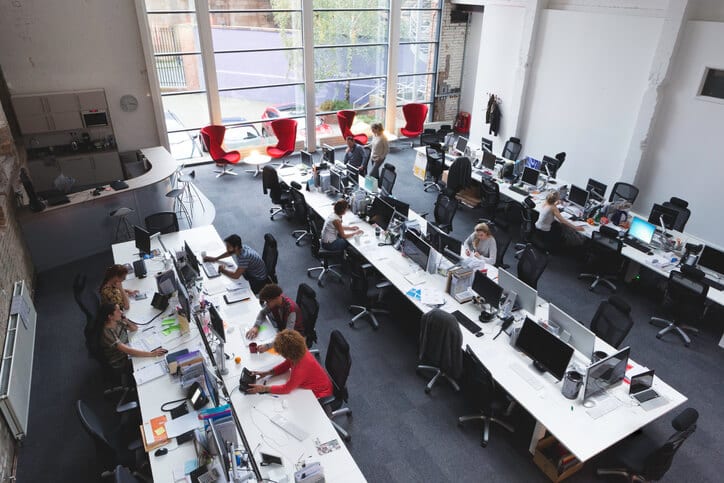 When Gartner released their list of 10 Technologies Driving the Digital workplace, there was one slightly curious addition: Bürolandschaft. In a list that includes Virtual Reality, Virtual Personal Assistants and Embedded Analytics, just to name a few, why include this 50’s era movement? As I questioned this, I realized how little I knew about the history of office architecture, despite spending my entire career surrounded by it.

German for “office landscape”, Bürolandschaft was a social-democratic movement that aimed to engender an egalitarian management approach.

Previous incarnations of open offices designed by efficiency experts like Frederick Winslow Homer and Henry Ford had been reserved for teams doing repetitive tasks, such as clerks and typists. In these previous open office systems, workers sat in completely open spaces with no division whatsoever. The open office plan encouraged employees from across the organization to sit together in a non-hierarchical organization.

Modernists believed that in order to break down organizational silos and foster collaboration, you had to break down the actual walls of offices. Architects such as Frank Lloyd Wright even went as far as to call walls fascist.

In the 50’s, Bürolandschaft emerged as a response to the rows-of-desks open offices when a German design group started breaking up the rows of desks into smaller, organic groupings of workspaces with small privacy partitions. Herman Miller further codified the movement when it began selling modular components to companies looking to save space and pack more workers in.

By the 1970s, the Bürolandschaft movement had gone by the wayside. As companies looked for ways to increase privacy in the open office, office space planning was dominated by seas of cubicles that embodied the 80’s and 90’s era American office environment. Red Stapler, anyone?

Fast forward to the 2000’s and the office landscape changed again, characterized by creative spaces filled with foosball tables and bean bags. This is when the open office concept really started to take off in the U.S. as a backlash to the cubicle farm. In addition, companies looked to promote leisure time in the the workplace and embraced the newly-enabled concept of  remote work.

Biophilia and the Digital Workplace

In June of 1997, a study done by the University of Calgary monitored workers as they transitioned from cubicles to an open office. Psychologists monitored workers before, 4 weeks after, and then 6 months after the move. They found that the new space was disruptive and stressful, and ultimately resulted in a loss of productivity.

Since then, numerous other studies have shown various negative effects such as increased frequency of illness and lower job satisfaction due to lack of privacy. However, the single biggest distraction found was noise. So how do companies address the need for collaboration AND productivity?

The answer, as Gartner may have been getting at, may be a new way of thinking about office architecture. Recent trends have been characterized by a merger of Biophilia and the Internet of Things (IoT).

Biophilia is a sustainable design strategy that connects people with nature and greenery. From sweeping views and green roofs to wall-gardens and water features, architecture firms across the world are experimenting with this concept. As it applies to office architecture, Biophilic design also stems from design team collaboration. Studies have shown positive impacts to the overall health, productivity, and stress levels of their occupants.

The ROI of Productivity

So what about the business case for Biophilic design? Increased worker productivity is hard to ignore.  A study done by the Herschng-Mahone Group, looked at the productivity of call center workers after rearranging employee workstations to allow them access to natural views, which cost the company $1,000 per employee. The results were productivity savings of $2,990 per year per employee. The investment was paid off in productivity in just 4 months.