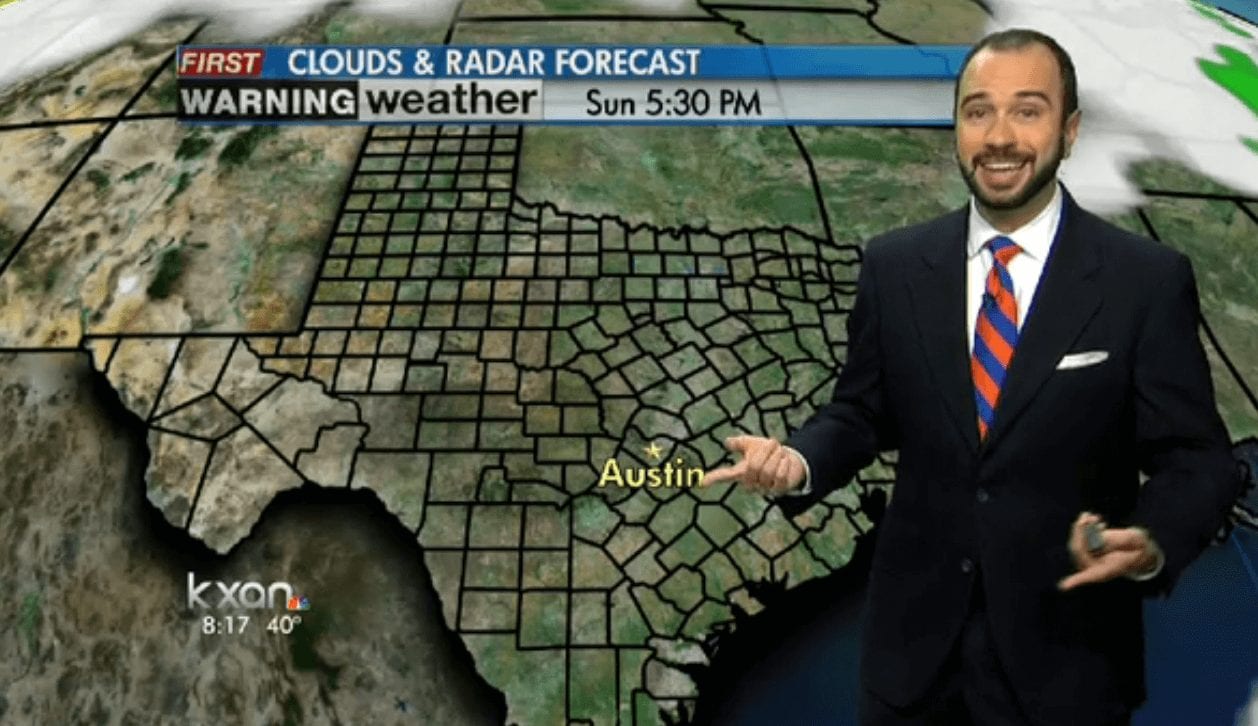 Today we are kicking off a series of profiles on some of the characters who work here at Bloomfire. Kicking us off is Nick Piesco, a former Meteorologist who is currently a User Experience Engineer.  On occasion you can still catch him reporting the weather on KXAN in Austin!

What do you do at Bloomfire?

I’m a User Experience Engineer – I take the work of our awesome Design and User Experience team and translate it into code so your Web browser knows what to draw on the screen. You see my work every time you use Bloomfire.

Where are you from?

I’m originally from Gainesville, Florida (Go Gators!) but I grew up in Pittsburgh (Go Steelers!). I moved back to Florida to go to college and haven’t lived north of about Memphis since – I try to avoid winter whenever possible.

You started your career in meteorology. When did you first become interested in weather and/or reporting?

I’m pretty sure I watched way too much TV at way too young and impressionable an age – one of my very early memories is of my parents taking me to the TV station to see how they did the news and the weather. When I was in elementary school, I donned my Peter Jennings tie and did entire newscasts for the class, complete with weather maps drawn on the chalkboard.

How and why did you make the transition from meteorology to software engineering?

Early in my college years, I heard about this cool new thing called the world wide web. You can put information out there for anybody to see, and create links between them? How awesome! I started designing and building web pages here and there, including one for the low-power TV station I worked at. I happened to move into the professional world as TV stations were taking their first steps to creating an online presence, so I worked on getting weather graphics out of our specialized computer systems and onto our website. (This is pretty easy now, but not so much then!)

At the same time, I was also designing and building the maps and graphics you see the weatherperson standing in front of on the screen. Taking complex concepts and being able to communicate them visually at a glance was always a fun challenge, which leads nicely to design and user experience for the Web. The whole process of taking an idea for something visual and making it real just by typing code on a screen is just super-cool to me, especially because I’ve never been great at drawing.

I love forecasting the weather and figuring out how to tell that story visually, and the TV part is great fun; but the long hours and frequently-bizarre

Nick reports the weather on KXAN in Austin in January 2015

schedule get very not-fun after many years. That said, though, I did get to missing it; so you’ll occasionally see me doing the weather on one of the local TV stations here in Austin! My weather compadres who are still in “The Business,” as we call it, are jealous I get to be on-air and still keep my beard.

What do you consider your greatest achievement?

I’m pretty proud of working a crazy full-time schedule while juggling going back to school and the occasional freelance project for two years to make a nice smooth transition between careers.

What hobby do you most enjoy and why?

I like to cook (and eat), and I also like to travel. Put those together, and I really like getting to know other cultures through their junk food. Peruvian food is awesome, even if you don’t hit up the local fast-food chain for a burger that has scrambled eggs with spicy sausage and French-fried potato sticks on top. (But I recommend you do.) Iceland is next on my list, and apparently the hot dogs are to die for.

I also collect license plates, “the most pleasurable hobby there is!”

What is your most treasured possession?

Not strictly speaking, a “possession;” but my family and friends. Everything else is “just stuff,” as my mom says.

What is an interesting fact about you that most people don’t know?

I accidentally fooled two separate people in Helsinki into thinking I speak Finnish.

What excites you or do you think is really cool about Bloomfire’s technology?

One-stop shopping! I used to work for a consultancy, so I got to see how a lot of businesses handle sharing knowledge and information; and it’s generally not done well. Once you have everything you need in one place, easily searchable, with the ability to ask questions, you won’t know how you lived without it. I honestly don’t remember the last time I sent an e-mail to someone else on the Engineering team.

Where did you choose to have your photo taken for this feature?

The Mean Eyed Cat. It’s a neighborhood institution, with friendly staff and a good beer selection. As a bonus, they serve Stubb’s barbecue in the back – we may or may not go there often enough that we refer to it as “the cafeteria.”

Click here to meet more of our awesome Bloomfire team.